The Treasure of Okinawa 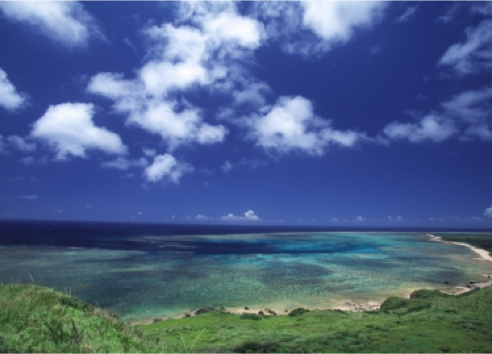 Ishigaki Island in the Yaeyama Islands of Okinawa, Japan

Masaru Shimabukuro is a songwriter and guitarist of the popular Japanese band BEGIN. He was born on this beautiful island.

He and his friend, Ryoko recently came to our house in Waccabuc, NY for a visit. We ate and drank a lot and then convinced him to play his songs for us. I was so taken by the melody of one song that I couldn’t get it out of my head. I had to know the lyrics of the song. My husband, Katsu, translated the words to me and also explained the following story about its creation.

Masaru’s band was asked to perform at a junior high school in Okinawa about 13 years ago. He and his band were already famous in Japan. He wrote a special song just for the occasion, although some of the words upset the educators at the middle school. It later became a huge hit all over Japan and today is sung at every school graduation in Okinawa.

Below are the lyrics to his song and here is the link to their performance: https://www.youtube.com/watch?v=Uy4FW0RTIBo.

How much do I really know? How much has it ever shown?
Of all the stars that shine above or clouds that come and go
You can ask me all their names, but I’m really not sure to claim
I was born here on this island, yet still I cannot say

But I know deep inside, something money could never buy
All the times that I’ve cried and the tears that have dried
It all happened right here under this sky

So many things are kept in darkness
In all the textbooks we blindly follow
No matter what you’ve heard in the papers
Believe me, there’s more to be seen
That is the treasure of my home, our island dream

How much do I understand? How much do I really see?
Of all the dying coral and the life under the seas
How are we to repossess, and give breath to what is left?
You could ask me for solutions, still I can’t explain

But I know deep inside, something money could never buy
I can tell in the tides to the waves that I ride
The ocean is changing before my eyes

So many things that are never spoken
On the radio and television
No matter how clear the pictures appear
Believe me, there’s more to be seen
That is the treasure of my home, our island dream

How much do I perceive? How much there is to be?
To the words which are sung to these island harmonies
Tuva Rama lullabies, Densa melodies
I can’t even define for you what they really mean

But I know deep inside, something money could never buy
Of the joy that they bring when we hear them all sing
While we’re dancing through the night until sunrise

Inside of me I will always cherish
The memories of the love I’ve shared
No matter how far we are apart now, my heart is there to stay cause
That is the treasure of my home, our island dream 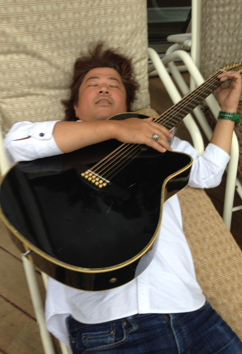 I couldn’t resist taking this photo! A little jet lagged, and after several glasses of wine, Masaru fell asleep on our deck. Still in position to play A7! (BTW he’s laying on my reversible, outdoor textile, “Frames” for Anzea.)

Masaru and his band BEGIN got their first break performing for a Japanese TV show, similar to our American Idol, over 25 years ago. When they won the first round they had no idea that they had to continue and write four more songs for subsequent shows. They had only written one song, but somehow they produced the songs in time and won the contest.

The three band members Eishō Higa (vocalist), Hitoshi Uechi (piano), and Masaru (guitarist) have been friends since elementary school and have been performing together ever since. In March, 2015 they released their 25th anniversary album.